The Power-to-Gas plant project planned in connection with Tammervoima’s waste incineration plant is progressing with a strong tailwind. In the project development agreement between Ren-Gas and Tampere Sähkölaitos, the parties have agreed e.g. for the utilization of flue gases from the Tammervoima power plant, as well as, the delivery district heating with zero carbon dioxide emissions to the Tampere district heating network.

The environmental impact assessment of the project has started, and the goal is to start commercial operations by the end of the year 2025. In December 2022, the project received the largest green transition energy investment grant in the history of Finland, with which the realization of the project took a significant step towards the final investment decision and the start of construction.

The Power-to-Gas plant will produce renewable synthetic gas, green hydrogen and district heat produced from the process heat. In the first phase, the size of the plant is 20 MW methane output and the plant will produce about 12,000 tons of synthetic renewable gas per year. The final size of the plant is 60 MW and the annual fuel production is approximately 35,000 tons. The produced renewable fuel will be used in the heavy road transportation, where it replaces fossil fuels and thus significantly reduces the carbon dioxide emissions of heavy traffic segment.

For the production of renewable synthetic gas, up to 110,000 tons of carbon dioxide will be captured annually from Tammervoima’s waste incineration power plant. The process heat generated in the Power-to-Gas plant is utilized in the Tampere district heating network. This recovery and utilization of process heat reduces the production of district heat based on combustion in Tampere.

The signed project development agreement is a continuation of the pre-study and the feasibility analysis, which evaluated the technical-economic feasibility of the project. The analysis showed that the Tarastenjärvi power plant area in Tampere is an excellent location for the planned Power-to-Gas project. Also, the market environment and societal support for clean domestic gas production is very strong currently.

“The signed project development agreement shows a strong commitment to the project for both Ren-Gas and Tampere Sähkölaitos. The project has received very extensive support from Sähkölaitos, the city of Tampere, and most recently from the Finnish Government, as the project was granted investment support of close to EUR 46 million. The strong cooperation of the companies, and the excellent location of the plant creates a very strong foundation for the further development of the project, with a target to build the largest Power-to-Gas plant in Finnish history in Tampere. I am very happy about our excellent cooperation with Tampere Sähkölaitos, which we can now continue within the framework of project development”, says Nordic Ren-Gas CEO Saara Kujala.

“It’s great to be promoting concrete new circular economy solutions that we can implement in Tampere in the near future. Together with Ren-Gas, we are promoting the recovery and utilization of carbon dioxide, at the same time we are getting competitive, carbon dioxide-free district heating and reducing CO2 emissions. Ren-Gas’ know-how and processes in the project development have been convincing, and we are very satisfied that we can continue our cooperation to promote this innovative project”, comments Jussi Laitinen, CEO of Tampere Sähkölaitos Oy.

The goal is to start construction during 2023 and start commercial production by the end of the year 2025.

You can find more information about the project and its progress on the Ren-Gas website at: https://ren-gas.com/projekti/tampere-2/ 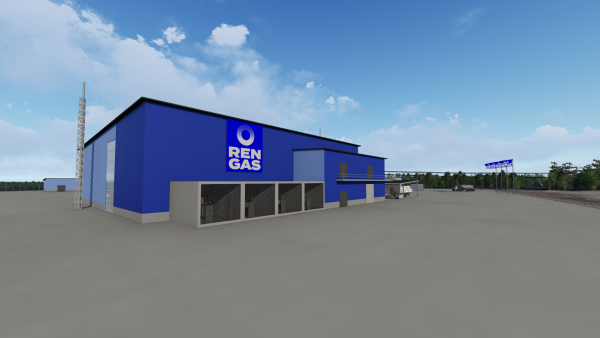