Etelä-Savon Energia Oy (ESE) and Nordic Ren-Gas Oy have signed a co-operation agreement regarding the feasibility study of a Power- to-Gas facility producing both renewable methane and green hydrogen.  The energy facility to be constructed at the Pursiala power plant site is a significant investment in the hydrogen economy and an important part of Ren-Gas decentralized, clean gas production network.

The agreement concerns the technical and economic feasibility study of the Power-to-Gas plant complex at Pursiala power plant site in Mikkeli. The purpose of the study is to confirm the technical and commercial feasibility of the project before the final investment decision is made. The signed cooperation agreement is a continuation of the preliminary study of the project carried out by the parties in the autumn of 2021.

The planned Power – to –  Gas facility will have an electrolysis capacity exceeding 40 megawatts and it will produce synthetic methane to replace approximately 18 million litres of fossil fuel in the heavy transportation sector. The fuel amount corresponds to the annual fuel consumption of 600 heavy transportation trucks in Finland. The project may be implemented in phases and its total value is likely to exceed 100 million euro.

The parties are jointly responsible for the overall project development work. The work around the feasibility study is led by the project development company Nordic Ren – Gas Oy. The company’s main business is the development and ownership of Power-to-Gas production facilities and the sale and distribution of renewable transportation fuels.

The project advances Etelä-Savon Energia Oy’s carbon neutrality targets and creates a solid basis for the long-term provision of competitive district heating. As a result of this project ESE gains access to significant amounts of carbon dioxide free district heating produced by the reuse of waste heat. In turn, Etelä-Savon Energia Oy provides the site for the Power – to Gas facility and the infrastructure connection points necessary for procurement of process goods. The feasibility of the project is also positively impacted by the Pursiala site, which is ideally located at key logistics routes and enables the utilization of sector integration.  Etelä-Savon Energia’s experience in the gas business is an added advantage.

“Ren-Gas is on a strong growth path in executing Power-to-Gas projects which aids Finland in reaching its carbon neutrality targets. We are very excited to start the cooperation on the production of clean gas fuels in the City of Mikkeli with Etelä-Savon Energia. ESE’s team is very knowledgeable and equally motivated to proceed with the feasibility study and I am confident that our relationship will become even stronger in the future”, says Saara Kujala, CEO of Nordic Ren-Gas.

The signed cooperation agreement forms a basis for a long-term cooperation for the development of clean energy solutions in Mikkeli. The Power-to-Gas plant will be implemented in two phases, with the first electrolyser of approximately 20 megawatts capacity to be commissioned in 2026. In the first phase, approximately 19,000 tonnes of biobased carbon dioxide emissions will be recovered annually from the Pursiala power plant. The share of district heat produced with waste heat will increase to about 20 per cent of the total district heat demand in Mikkeli annually.

The second phase of the Power-to-Gas plant will be completed by 2030 and by that time the electrolysis capacity of the plant will reach 40 megawatts. Consequently, almost 40 percent of Etelä-Savon Energia’ district heat could be produced cost-effectively with waste heat. The amount of biobased carbon dioxide recovered would be approximately 36,000 tonnes per year.  The use of biofuels combined with the carbon dioxide capture and utilisation makes Etelä-Savon Energia a carbon negative energy company.

“After the completion of the Power-to-Gas project the district heat production of Etelä-Savon Energia will become carbon negative. In other words, the project will turn the district heating system in Mikkeli into a carbon sink. The agreement signed with Ren-Gas is a significant milestone in ESE’s long term, pioneering work for climate change and environmental protection. The project will also mean more affordable district heating for our customers”, says ESE’s CEO Erkki Karppanen. 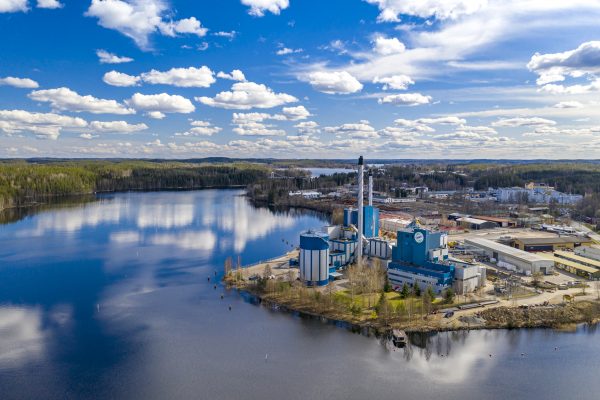